STUTE FOODS is among the Great Taste winners of 2017 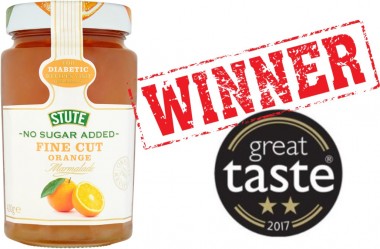 Great Taste, the world’s most coveted food awards, which celebrates the very best in food and drink, has announced the Great Taste stars of 2017. Out of over 12,300 products to be judged, Stute Foods of Bristol was awarded a 2-star Great Taste award, which means judges dubbed it outstanding for its No Sugar Added Fine Cut Marmalade.

“The orange colour is bright and clear, proportion of peel good. The set is good, the balance of flavours exceptional - good bitter flavour but with rear fruitiness and just enough sweetness”

Judged by over 500 of the most demanding palates, belonging to food critics, chefs, cooks, restaurateurs and producers, as well as a whole host of food writers and journalists, Great Taste is widely acknowledged as the most respected food accreditation scheme for artisan and speciality food producers. As well as a badge of honour, the unmistakeable black and gold Great Taste label is a signpost to a wonderful tasting product, which has been discovered through hours and hours of blind-tasting by hundreds of judges.

“Having never entered the awards previously Stute Foods wanted to put its No Sugar Added Fine Cut Marmalade to the test against all major competitors in the market”, explains Laurence Hybs, Stute Foods Managing Director. “We are over the moon to have been awarded a 2-star Great Taste Award for this product and hope this will add value to our brand both in the UK and Internationally.

For more information please contact us via [email protected]